5 Sex Facts About Ben Franklin That Will Blow Your Mind

The man, the myth, the legend

You know Benjamin Franklin as a Founding Father, prolific author, creative genius, and even a foreign diplomat. His work has solidified himself as a legend in American history, and we owe a lot to his work.

But what you may not have known about Benjamin Franklin was that he was an infamous sex fiend. Even during his lifetime, he had a notorious reputation as a lover of women (mainly prostitutes).

Franklin’s thirst for sex started early as a teenager. In 1720, at 14 years old, he became fascinated by Boston’s sex workers, referred to then as “doxies” and “ramblers.”

Then, at 17 when he moved to Philadelphia and opened his printing business, he began courting Deborah Read, who was two years younger than Franklin.

They would marry in 1730, but not until he first went to London, where he slept around as much as he liked.

Even as a married man, Franklin continued to sleep with prostitutes and didn’t seem to mind that he had a reputation as a womanizer.

Franklin’s sex life was the subject of hot gossip not just among American aristocrats, but across the pond in Britain and France as well. History continues to remember him as an esteemed figure in US history, despite his antics.

When Benjamin Franklin died in 1790, he left behind plenty of juicy stories which are often brushed aside in favor of those showcasing his role in the country’s early history. [i]

So let’s forget about what you’ve heard about the man and get to know him a little bit better. Put on your powdered wigs and let’s dive deep into the nether regions of history, starting with Benjamin Franklin.

1. Some of Franklin’s letters were too obscene to publish.

Yes, that’s right. When a collection of Franklin’s letters were sent out for publication in the 19th century, several of them were deemed too lewd for obscenity laws.

One of these letters, “Advice to a Friend on Choosing a Mistress” (dated June 25, 1745), is an entertaining read and it’s hard to tell if Franklin is serious or not. Whatever the case, this letter is unabashedly explicit. [ii]

In his letter to a young man, Franklin explains that there is no cure for sexual urges, and the best thing to do is to marry. But Franklin seems doubtful his young mentee will take this advice.

He gives seven reasons why the young man should choose an older mistress over a younger one. Franklin explains that older women are better at conversation, have a smaller chance of unwanted pregnancy, and are less likely to tell anyone about the affair.

Not only that, but Franklin goes on to say that sex with older women is equal, if not better, than sex with a younger woman because they are more experienced.

He tells the young man that “what is below the girdle” is indistinguishable between older and younger women and use a basket to cover the older woman’s body if it bothers him. [iii]

Besides writing about picking mistresses, Franklin was a prolific writer about other subjects as well. His letter to the Royal Academy dubbed “Fart Proudly” discusses his love of farting and even comes up with ways to remedy stinky gas.

They say all’s fair in love and war, but that doesn’t stop someone from being an asshole. In 1724, when Franklin was still a young man, he and his friend James Ralph visited London. It didn’t take long for Franklin to come onto his friend’s mistress, and an infuriated Ralph cut ties with the future Founding Father (and refused to pay Franklin the 27 pounds he still owed). [iv]

3. He was actually a terrible husband.

At no surprise to anyone, Benjamin Franklin was a terrible husband to his poor wife, Deborah.

Their marriage was rumored to be one of convenience for Franklin. He didn’t appear to have any attraction towards her.

At one point, he compared her body to a beer mug. Not only that, but Franklin supposedly had 15 children out of wedlock, one of whom Deborah raised as her own. [v]

Franklin did little to hide his cheating ways. The two remained married for 44 years, of which 18 they lived apart. When Deborah suffered a stroke when Franklin was overseas, he neglected to return to Philadelphia. Deborah died in 1774, alone. [vi]

4. French women loved Franklin, and that might be why America won the War.

These two things are connected, believe it or not. Benjamin Franklin may have been as appealing as a bowl of plain oatmeal, but even as an aging senior he managed to pull some serious French pussy. In fact, his popularity among French noblewomen was one reason why he stayed overseas for so long.

As a guest in the court of Louis XVI, Franklin tried time and again to convince the king to send troops to help the Americans win the Revolutionary War. However, his efforts were not successful–that is until he enlisted the help of several high-ranking ladies.

Franklin managed to persuade the women to get their husbands to talk to the king about sending troops to help Washington. The king listened, and Franklin’s idea worked. Without the benefit of French soldiers to aid in the war against Britain, America would have lost the battle, and things would be much different than they are today. Who says you can’t work and play at the same time? [vii]

5. The older he got, the younger he liked his women.

While Franklin’s affinity for older women was no secret, he couldn’t say no to younger ones.

This was especially true as he aged. At 48, he tried and failed to seduce 23-year-old Catherine Ray. That didn’t stop him from making multiple attempts to have a relationship with her as they continued to write one another, though.

In 1767,  Franklin was in his early sixties. His friend Charles Wilson walked in on him kissing and fondling a young girl on his lap. Franklin’s thirst for young women was so well-known that a short poem about it emerged:

“Franklin, tho’ plagued with fumbling age / Needs nothing to excite him / But is too ready to engage / When younger arms invite him.” [viii]

History isn’t the only thing Ben Franklin went down on.

So there you have it: five facts about one of America’s filthiest Founding Fathers. Although, he may have some competition with some of his other colleagues. But that is for another story. 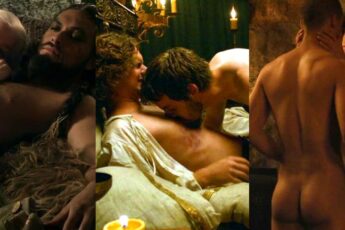 10 GoT Sex Scenes You Need To See Again