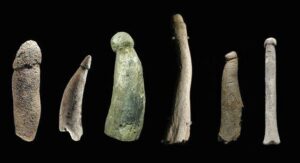 The stone was highly polished, carved in a lengthy phallic shape and found amongst a number of personal care items which led researchers to believe that this was a product used for sexual pleasure.

The History of Sex Toys – Greeks and Romans

History of Sex Toys – The Chinese

The History of Sex Toys – Hysteria

The film is based on a true story and follows the journey of Dr Joseph Mortimer Granville. Granville lived in London during the Victorian era and worked alongside another physician who specialised in the treatment of ‘Hysteria’. Hysteria is a vaguely defined ailment which is easily recognised today as sexual frustration. The physicians believed that a woman’s display of mental or emotional distress was a sign that she needed sexual release, this took the form of genital massage which as you can imagine, proved to be very popular amongst clientele. However, for the physicians this caused unbearable hand cramping which led to the creation of the vibrator.